You're never alone in the woods.

After an afternoon spent wondering if you and your friends are those jackasses who have to pay a $25,000 fine to the mountain service after being rescued off a trail you had no earthly business being on in the first place, there are only two reasonable things to do: eat chili and drink.  So that is what we did.

When we had realized that there could potentially be a moose in the woods around us at the end of our hike, we were all completely freaked out.  If not for the ice, we literally would have sprinted to the car, and then again from the car to our cabin (which was about a 5 minute hike from the road).  Instead, we made plenty of noise, moved as fast as we could, and were greatly relived to be safe inside.  Once we got the woodstove going, Justin started dinner and I uncovered a bottle of rum in one of the cabinets; it had a friendly little note "To the 2011 campers at Ritchie Smith Cabin, From the 2010 campers."

(Important side note: we were not totally surprised to find booze in our cabin.  The cabin is owned by the Dartmouth Outing Club.  There were no less than 4 bottle openers in the drawer, and a stack of shot glasses in the cupboard.  These people are professionals as anyone who went to Dartmouth can attest.)

The most simple things in life seem amazing when you have had a day punctuated by the word "treacherous" and that includes vegetarian chili and a very cold beer.  It was not long before we were laughing at our near-misadventures, including the part where Justin (for no possible reason!) started singing Bon Jovi--which Sam and I immediately got stuck in our heads.  I think that we had even convinced Sam that she had had a good time, all things considered.  But that was when we realized that we were not alone in the woods.

It started with a lone visiter scurrying along the log walls while we lounged in front of the fire.  Aside from a quick "Oh, look up there" from Justin, there was no other signal, no sound even, from our little friend.  We watched, quietly, wondering if he would reappear, but he never did.  The night went on, we had a few more drinks, popped some Jiffy Pop, invented some very creative new blogs, and finally decided that it was time to turn in, as Sam and I had plans to snowboard the next morning at Cannon.

But sleep was not to be.  Because we were not alone; our cabin mates were nocturnal and full of energy in the very warm cabin.

It started innocently enough.  A few pitter-patters here, a quick rustle in the garbage.  And then the cabin was full of life.  Full of small, furry, rodent life.  Honestly, if I had turned on my headlamp and seen them trying to carry the food box away, I would not have been surprised.  Sam--who was the closest to the food box--swears they mounted a coordinated attack, which it surprisingly withstood.  Up in the loft, I was awake most of the night waiting for them to come into my sleeping bag and snuggle with me.  More than once, I know that they ran just past my head.  All night they took turns raiding the garbage bag to seek out unpopped Jiffy Pop kernels.  Finally, I had to whisper into the dark "Shut up, mice."  They ignored me.

The next morning, Sam and I dressed and set out for Cannon.  After a few runs, we came into the lodge for coffee and tissues.  I took off my helmet and hat, and noticed a few red threads.  I poked around at my hat and 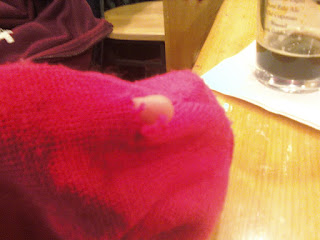