One of the more interesting things that I learned in the woods was that my friend Justin has learned to read Tarot cards.  For those of you who have known me well for some time, you can well imagine that I was completely taken with this.  I have always been enamored of mystical and magical things; I own more than one Ouija board and have had some unexplainable things happen to me (you know, beyond being light as a feather and stiff as a board at every middle school sleep over I ever went to).  So, when Justin told me that he had taken to reading Tarot cards, I immediately asked him to read my cards.

My reading was fairly simple: after shuffling the deck a few times to imbue it with my energy, I chose three cards and placed them face up.  The first card represented the source of my question; the second card represented where I am at now with that question; the third card represented how I should proceed in my life.  A fourth card, with more specific instructions, was also available should I chose to draw it from the deck.  Apparently, you should approach the deck with a specific question in mind, but the first two times I did not have a particularly well formed question, just a pervasive anxiety (me?!) about my future.  I was hoping to turn over cards that would say things like "run another ANOVA and everything will be clear" or "don't worry, you aren't wasting your life."  Instead--both times--my middle card (the one that represents where I am at now in my life) was this: 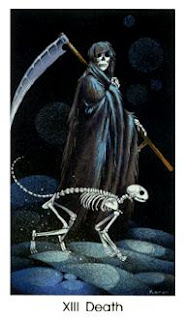 Justin was quick to assure me that the card does not represent physical death, but a time of transformation and change.  Change?  That is right up there on my list of fears, just below spiders and clowns.

Justin (and the internet) went on to explain that the Death Card, particularly when drawn as the middle card, indicates that a person is going through a period of transition, where the old self "dies" and allows the new self to be born.  The first time that I got the card, I thought "coincidence."  The second time, I thought "Damn it, these cards really know me."

And anyone else who knows me knows that this is the card that best represents my life right now.  I have been a student for nearly 25 years, all told.  That is the only "self" I know.  And now I am finally (unless I can find yet another way to avoid it) on the verge of being done with school.  I will have a PhD; what else is there without just completely changing disciplines?  (Believe me, I have thought about it, but Matt has made it pretty clear that he will make sure that no one ever finds my body.)  I will no longer be a student; I will be a totally new me.

But what does that mean?  What the hell am I going to transform into exactly?  What if the new me doesn't like Jason Statham movies or playing 3-Man or The League?  Oh god, what if the new me won't wear my bat wings?  It is too terrifying to think about.

But as afraid of it as I am, I can't stop it from happening.  It is part of the natural cycle; we all must die and be reborn, and live each of those lives to its fullest.

"Having left the tree from where he hung, the Fool moves carefully through a fallow field, head still clearing from visions. The air is cold and wintry, the trees bare. Before him, he sees, rising with the sun, a skeleton in black armor mounted on a white horse. He recognizes it as Death. As it stops before him, he humbly asks, "Have I died?" He feels, in fact, rather empty and desolate. And the Skeleton answers, "Yes, in a way. You sacrificed your old world, your old self. Both are gone, dead." The Fool reflects on that, "How sad." Death acknowledges this with a nod. "Yes, but it is the only way to be reborn. A new Sun is rising, and it is, for you, a time of great transformation." As Death rides away, the Fool can feel the truth in those words. He, too, feels like a skeleton, all that he was stripped away. This, he understands, is how all great transformations start, by stripping things to the bone, and building fresh upon the bare foundations."  (http://www.aeclectic.net/tarot/learn/meanings/death.shtml)
at January 09, 2011