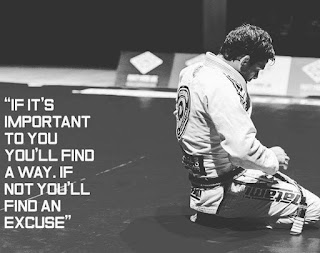 I spent several years of my life (like the last decade) studying and applying theories related to motivated behaviors, mostly in the context of school learning.  In education, we are really worried about motivation and engagement - we want students to be active participants in the learning process, which makes sense because you really need to be paying attention to something in order to learn it and your emotional state when you learn something is crucial to your memory.

But I think that perhaps this idea that we all need to be motivated all the time, and that that is the key element to success, might be slightly exaggerated.  Okay - like a lot exaggerated.  It's great in school because school is filled with new things that you have to learn, and we want to instill in students a mindset of loving to learn.  (Although I would also argue that children already have that, then school sort of ruins it and then has to find artificial ways to replace it.... but I digress.) But most of our lives, we are not in school.

Instead, the majority of our time on this planet is spent getting up every day and having to make decisions about whether or not we are going to do the things we know we should do, even when we don't want to do them.  And relying on motivation every single day to get shit done is not a good plan because it is impossible to always be motivated; that is just how it works.

For one thing, motivation is a state, not a trait. Just like you are not always tired or hungry (okay, I am aways both of those things, but I am sure you are normal), you are not always motivated.  It takes the right situation to trigger that sensation, and even when you are motivated to do something, it is a lot more complicated than that usually.  Mostly it is complicated because we are rarely singularly focused on a task to the point that we don't have competing motivations.  We usually have lots of goals we want to attain, and sometimes those goals are in direct conflict with one another.  Like losing weight and eating cake - you have to choose one, even though both may be things you are "very motivated" to do.  In the end, one of our motivations wins out, and that is the goal we move towards.

Of course, that is not how motivation is sold to us in popular culture; we tend to think of it as a personality trait - people are either motivated or they aren't.  For people those of you who have been accused of being unmotivated, let me take a moment to defend you: everyone is motivated for something.  If other people are telling you that you are unmotivated, chances are there is just a mismatch between what you want to do and what they want you to do.  That said, if your only motivation is to do as little as possible.... how did you even end up on this blog that is mostly about running?  Are you lost?  Shoo...

Instead, I want to talk to all my running (or not running) peeps who are usually motivated but find themselves in a rut.   I am in that rut right now. Instead of hopping out of bed to get after it, I slog around the house putting off my run until I don't have time to go as far as I should.  On Wednesday nights, I drag a hockey bag's worth of excuses to track practice so that I don't have to admit that I just don't feel like running really fast in circles for an hour.

I think of this as the rut of despair because it is filled with guilt and panic and feelings of inadequacy. Usually I am SO F-ING EXCITED about running, but lately I am just lower-caps, no profanity excited.  This makes me feel guilty because I feel like I am cheating on running with sloth and I feel bad for not wanting to do workouts or be happy about talking about running.  Then I panic because what if I always feel like this - what if my motivation never comes back?  If I cannot get back into training with enthusiasm, then I am going to get slow and old and people are going to notice that I am not good, and then I will have to find a second hockey bag to hold all of those excuses!  Too much baggage; I just am going to crawl into bed instead.  Which is when the rut of despair becomes the rut of ruin.  It ruins my mood, it ruins my relationships, and it ruins the one thing that brings me sanity*

*Yes, yes - I am aware that this is probably the least appropriate word because I do enjoy that nonsense where you get in a van and then don't sleep or shower for two days.  Sanity is a very relative term here.

The rope-ladder out of the pit of despair is remembering that it is okay to not be motivated.  It happens to everyone, and is a function of having so many competing demands that you run out of energy to be excited about all of them. Just like motivation is a state, being unmotivated is also a temporary state. It is a temporary state that sucks the life out of you while you are in it, but that doesn't mean a period of low motivation has to tank my training, right?  Instead, I have learned to reframe my panic into a new challenge because shiny new things often help my motivation to rebound - like buying fun new shoes or registering for a new race! And that can work for any runner when we hit that rut of despair.  Reframing your goal, finding a side angle to kick-start your motivation, and accepting that sometimes you are just not going to be feeling it are all ways to bring yourself back up out of that funk.  The key is to find the right shiny new thing to remind yourself of what it feels like to be motivated.

In my case the shiny new challenge is "shut the fuck up little voice that wants to quit; the schedule says 10 miles so get your shoes on and let's go."  For me, taking choice out of the equation and adding in a healthy dose of self-spite works every time.  Because let me tell you, I am pretty motivated to shut that voice up and get out of this rut so I can get back to loving what I love to do.