Here and Back Again: A Race Recap of Sorts

I rarely write about specific running events or races, because mostly this blog is about what I think about when running - and that is almost never the race. Plus, I seriously doubt that anyone who follows this blog wants to read a race recap.  I mean, I run races and don't like to read race recaps, why would I write one??

Except this time I am going to write about a specific race, although it is not really a race recap.  It is more a reflection on what it means to grow up somewhere, and what it means to come home.

AKA, shit is going to get deep.

Sometime during the last Ice Age, I was in high school.  I grew up in a very small town and was with the same 45 or so classmates every year from first grade through high school.  So my sophomore year my parents let me GTFO and I went to a very small boarding school in Lake Placid; Northwood.  I spent three years at Northwood, and so, like anyone who was influenced by their teens years (aka, everyone) much of who I am today is wrapped up in my time there.  For example...

Every year, we got woken up one random morning, told to put on hiking boots, were handed lunch in a bag, and were dropped at the base of one of the many, very tall Adirondack Mountains.  This tradition still exists, and we call it "Mountain Day."

If you are not into mountains or surprises, or surprise mountains, it probably doesn't sound awesome to you.  But as a teenager trying to figure out what I loved, let me tell you - I figured out really quick that I love mountains.

Our headmaster (John Friedlander, who was drafted by the Packers and is the reason that they are, to this day, my favorite team) felt that sports were essential to a well-rounded student (I do not disagree) and so we had to do something active every day.  With very few girls, the fall was soccer; there were just enough of us to field a team and have a handful of subs.  In the winter, we could ski or we could do "Rec Sports" which was the catch-all for anyone not on a team or on the mountain.  I went to the mountain a lot - our local ski spot was Whiteface which was the home to the Olympic Winter Games twice, and the school bused us over every afternoon.  I learned to ski, and enjoyed that for a few years until I broke my arm on the final run one afternoon.  After that, I switched to snowboarding and never looked back.  I was not exactly what the kids would call "good" but I really enjoyed being on that mountain, even though I learned at an early age that it could seriously wreck me if it wanted to.

Rec Sports was a haven from being chewed up by the mountain, and the blistering cold that came with being out there, and it was a way to avoid having to do other team sports like tennis (OMG, I was so bad) or go Ice Climbing (yes, really - I went to high school in the 90s before anyone knew you were supposed to keep students alive).  And for me, rec sports was always running.  My junior year, two of my favorite teachers (Mellor and Brody for my fellow alums following along at home) ran a marathon.  They came back with stories of wanting to die at mile 23 and ending up in an aid tent, and I thought "I need to see about this!"  (Yeah, my fundamental personality has NOT changed.)  So I started running.  I would check myself off campus and run around Mirror Lake everyday, which is about 3 miles.  The first few times I went, I could barely run, and would have to walk big chunks of it.  But over time, I got stronger and faster, and I ran around that lake almost every day in my senior year.  It was in Lake Placid that I became a runner.

That was in 1996.  Since I graduated, I have rarely had the chance to come back to Lake Placid to run, or to visit Whiteface.  But this weekend I got to do both, and it taught me LOT about who I am and how much my time living here made me that person.

Today, I ran (LOL, no, walked) the Whiteface Sky Race.  If you're too lazy to follow the link, let me give you the short version: it was 15 miles of Vert.  We ran to the top of the mountain, back down, did a little loop in the woods, and then went up and over the mountain again.  Shorter still version: it was a race over a mountain, twice.  Shortest version: OMG so much vert.

It was essentially a three loop course: an Alpine loop that was about 5 miles with 3200 feet of elevation gain then loss, a 5-mile Flume Loop, then a second crack at the Alpine Loop.  At the end of the first Alpine loop, I knew I had vastly underestimated the course, and I went into the Flume Loop - which was mostly flat - already running on glycogen fumes.  I made it about two miles until I had to walk, and I really struggled to do more than fast walk through most of that 5-mile section of the course, which was by far the easiest section.  At about mile 9 I decided I was not going to do the second Alpine Loop.  But my family was there, my husband told me they "would wait as long as I needed, go have fun" and of course, off I went.  Within 500 yards I was already planning my DNF.  I sat down a LOT.  Including to take some pictures. 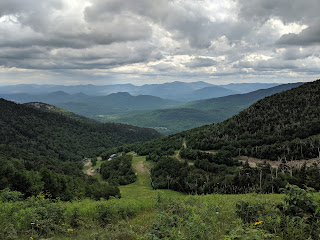 About15 minutes in I met a guy coming down who had DNF'ed and said "just check in at the aid station up ahead and let them know."  I didn't realize the aid station was .75 mile away!  But when I got there, I told them I was done.  I sat under the chairlift for 10 minutes, drank some water, and stopped my watch to begin my decent (Strava integrity and all that).  The aid station workers tried to talk me out of quitting, but I was bonking hard and knew I was not going to make it.  We joked about having them call me a helicopter and I started my slog of defeat.

I made it about 500 yards.  And then I stopped.  And said Fuck It, and turned back up the mountain.

And that is when I knew that this place was a part of who I am, even if it has been almost 25 years since I lived here.

I love that stupid mountain, even though every time I am there, it puts me in my place.  And I love running. And I was not going to stop running just because I was tired - not when I would have been leaving behind a few more minutes (okay, hours) with the mountain.

On the final decent, when I was trying not to just tuck and roll down the mountain (pretty sure I would have been disqualified for that), I spent a long time thinking about what it means to me to be back in Lake Placid, and to have the chance to be in a place I love doing a thing that I love.  Today was not a good race for me; it was hot and I was a lot slower than I had hoped.  But it helped me remember how much I love being outside, and how important being active is for me to be a happy person (thank you, Frieds).  I learned all of that here in high school, and it is something I have carried inside of me and nurtured for the last 25 years.

There are obviously a lot of other things that high school taught me (lol, that's a whole other blog post!) and that I have learned from my years of running.  But today was a rare and helpful chance to spend some time reflecting on how this all started, and how much I have not actually changed since I was 15 years old.  And of course, how much I have.  15 year old me would have quit 20 minutes into the first Alpine loop, but 41 year old me only quit for a few minutes, and not until mile 12.  :)

And it was totally worth it because it felt really good to cross that finish line, and not let that mountain beat me today. 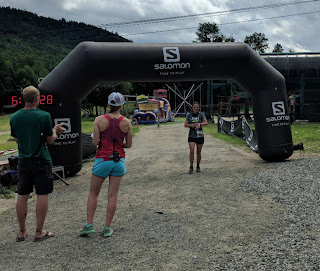