The bear went over the mountain, to see what she could see.

I survived my three nights in the winter woods, and now that my hands are finally defrosted I can tell you all about it!  I was out in the woods with my two friends: Justin (who is still my friend) and Sam (who I believe will forgive me someday). Overall, it was a good time and there were no spiders--real or imagined.   But, the theme for the weekend was definitely "Huh, I was not expecting that."

For example, I apparently did not make it clear to Sam that by "camping" I meant "no electricity or plumbing."  So, when we got to the cabin (which may have been the word that caused the confusion) and there was an inconveniently located outhouse, I think she was a little surprised.  To be honest, Justin and I have no problem with not showering for days and peeing in the woods.  Perhaps this is just because of where we grew up, and all the time that we spend outdoors now.  Sam, on the other hand, grew up in Baltimore, where there is apparently more than enough indoor plumbing to go round, and no need to ever--ever--change one's clothes in public.  Who knew?

Unfortunately, that was not the only "surprise" of the week.  On Tuesday we went out for a 7-mile out-and-back hike that took us past two different lakes.  What the trail map failed to mention (or maybe it did--but we could not see it in the very dim light of the cabin) was that the trail was very steep in parts, and followed a lot of running water, so that in winter it was covered in ice!  Hooray!  No, not really.  Justin had the good sense to wear Yak Trax over his hiking books.  Sam and I did not.  While he plowed ahead in a sprint to the top, we slipped and scrabbled and swore over icy patches, boulders (hey--when you are as short as we are, everything is a boulder), and tree roots.  All of this might not have been so bad if Sam had had any idea what to pack.  In the future, I will also include in my emails: don't wear jeans.

The first real "huh" moment on our hike, however, was when we came to this: 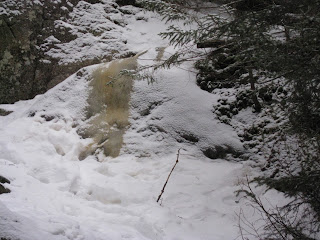 Here, it does not look so bad.  In real life, that icy patch is on a rock about 6 feet high.  When we first encountered it, we had to go down it.  Justin says "How are we going to get down?"  Sam and I thought "How the hell are we going to get back up!"  Turns out, by climbing through the trees like crazy mountain monkeys.  Then we did stuff like this about 50 more times, but I could not be bothered to take pictures of all of it.  You get the idea: it was steep, icy, and somewhere in the range between doable and just plain stupid.

After much pretending that we were all having a good time, we did finally make it to the top.  I think that it was totally worth it, and I took some pictures to prove it.  And it is a damn good thing that it was worth it, because my fingers froze taking these pictures: 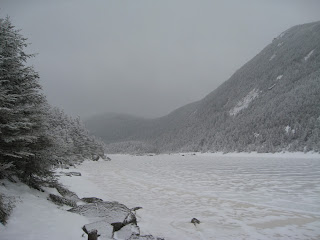 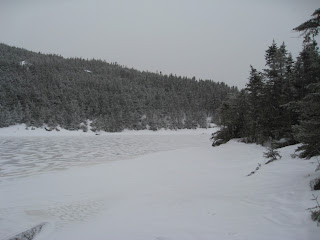 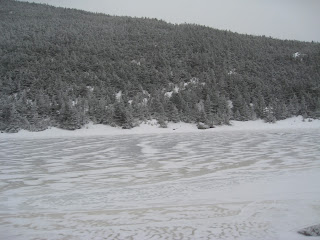 And now perhaps you are wondering: did you take pictures on the way down?  Of course not.  Why, you ask?  Well, that would be because on the way down (which I spent largely on my butt, sliding to make Bear Grylls jealous thank you very much) we totally ran out of daylight.  Huh--guess we should have timed this better!  We did make it most of the way, but we walked the last half mile or so out in the complete darkness.  Which, to be honest, was sort of exciting, and we did all have headlamps (that we put on after Justin slid off the trail into the woods the third time).  But you know what else is in the woods after dark, other than stupid hikers?  Moose!  And you know what else?  They are really freaking big!  We made it the whole way down the mountain, in the dark and snow (oh, did I not mention that it snowed the whole day? It was beautiful but also the reason we ran out of daylight), and we were finally feeling like we would not die in the woods.  The Justin stops and goes "Did you hear that?"  Huh, I was not prepared for that.

I have never been so happy to get back to a cold, dark, no-plumbing cabin in my whole life.