So here's a thing that pisses me off... 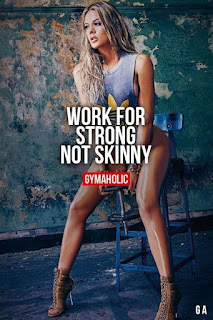 And this pin enrages me.  Because that woman is skinny.  Not that it's bad to be skinny, and many people exercise for exactly that reason.  No.  This pin pisses me off because it doesn't portray a woman who is actually doing strength work.  (Last I checked, sitting on a stool wearing next to nothing isn't something that badass women spend a lot of time doing at the gym.). And then it also pisses me off because it perpetuates this weird belief that women who have muscle are fat - or usually we say it in a more PC way "don't lift heavy, you'll bulk up." It also suggests that strong is only acceptable as long as it conforms to expectations about sex-appeal.

And this is bullshittery.

I'm all for motivational images about being in shape and all that.  But I am not for sending that message in words over a background image that tells the exact opposite story.  Because what this image actually says is "It's okay to work-out, but it's really important to look hot while you do it."

Being strong can look like a lot of different things.  For example: powerlifting.  Like these ladies who could probably bench press my car, and are in fact "training to be strong." 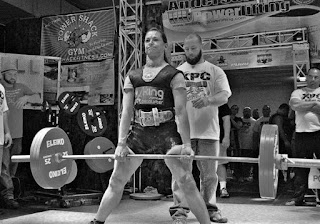 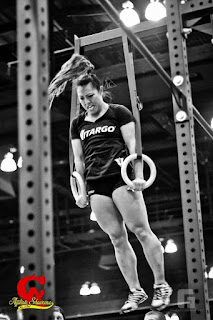 Being strong doesn't have to involve massive amounts of iron plates.  Even being able to move your own body through space, against gravity, requires an enormous amount of strength.

Have you ever done a handstand?  I have.  It's really effing hard - and that's using both hands. 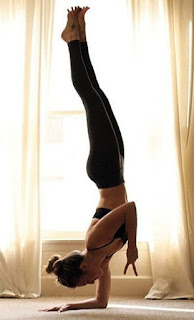 A few months ago, I'm not sure I would have noticed this right away.  But in October, Outside magazine published a spot-on piece about the blatant sexism in the stock footage used of female athletes.  They wrote, not inaccurately, about the overwhelming use of images of women doing sports while wearing sexy outfits.  And then also pointed out the dearth of actual women who deadlift in their underpants.

It was the first piece in what has become a new mission at Outside: to accurately and equitably represent women in sport and outdoor fields.  Who knows what could come from this.  The sport and outdoor industries have a history of seeing women as smaller men who like to wear pink gear, and only recently have substantial strides been made in terms of clothing and equipment that is in fact designed for performance.

I do think that part of why the change is slow has to do with images like the "train to be strong not skinny" one above.  As long as we - women - continue to accept the idea the way we are portrayed, the longer it will take before athletic clothes don't double as a "sexy wrestler" Halloween costume.

The longer we accept the idea that we need permission to not have our workouts be about being skinny, the longer it will be until women feel comfortable being strong.

And the longer women accept the idea that lifting heavy will make you bulky (oh, and that even if it does, that it's a bad thing) then the longer until I can find pants and shirts that fit the strong body I have, and I'm getting really sick of not having anything to wear when I workout.

Although, I guess I could just wear my underpants, while I just sit on this stool looking all strong not skinny...
at April 25, 2017