A few points, for reference


Hereclitus once (which is just the literary term for a wicked long time ago) wrote "You can never step into the same river; for new waters are always flowing on to you."  I have always loved this quote; it is both simple and profound.  Of course, it helps that I grew up on a river, a huge river, that never seemed to change--but of course it does, by millions of gallons of water everyday (probably--I don't really know, actually).  Since it's been a while, here's a picture (in case you are one of the two people reading this who hasn't actually seen the St. Lawrence for yourself): 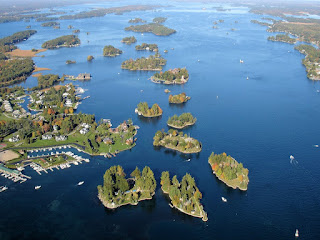 Obviously, this is not the whole thing; this just happens to be a picture that I downloaded from one of about a million pictures available on the internet.  (Who knew there was more than cats on that thing?!)  Alright, back to the point...

I saw this river every day for the first many years of my life, including on the first day (I was born in the hospital that overlooks the channel).  In my mind, the river just IS; it never changes.  But the truth is that the river itself changes all the time, all day every day.  The islands don't change, the houses and the castle, the docks, the marinas, the bridges all stay the same.  And because they are the point of reference for the river itself, the water seems to stay the same as well.  But it is a false sameness, as Hereclitus so artfully reminds us. It is an interesting paradox, one that could easily spin out into an examination of reality, but it is a little early in the day for that, so for now my point is simply that the appearance of sameness is often an illusion, hiding constant change.

This quote did not come to my mind because I have been anywhere near the river (for a depressingly long time, I might add).  Although... Sunday I was near the ocean.  I ran a race in Salem, along the shoreline, which was very beautiful.  But, I wasn't actually in the ocean, I was on land, doing something that could arguably be called racing.  The course was an out-and-back loop, and the distance that Renee and I did required us to run that out and back twice.

Normally, that is a death sentence for a runner.  Seeing that a course is an out-and-back, knowing that you have to do it multiple times, seems like the most boring thing in the world.  But, (oh hey--here's the connection!), that sameness was only an illusion.  Although yes, we did cover the same five mile stretch four times, each section felt different, like it's own separate race.  All the points of reference remained the same, but the thing being measured (in this case our running, rather than flowing water--again, a tangent I could easily go off on but I won't today) was fundamentally different as it passed each point over and over.

In the car driving back to Boston, we talked about how this is a reality for all runners.  No run is ever exactly the same, even when you take the same route or cover the same distance.  For example, Renee and I were talking about the 5k distance.  Last week in class, I had been talking about running with my high school students; they were taking guesses about which mile is the "worst" in a 5k.  A few of them thought the first, because they figured you had the farthest left to go; others said the middle mile because it is just hanging out in the middle there; a bunch thought that the last mile would be the worst because you are tired and know that the end is coming up.  I had to explain to them that every time you toe that starting line, it is a different mile that is the worst (and the best).  You just never know; each run is it's own experience.  Even when you are covering the same stretch of pavement as the days and weeks before, each run holds its own possibility. Just like every time you step into a river.  Or step out your front door.


There is a part of this which is very sad.  The fact that a river or a run can never be the same thing twice is a little depressing.  There have been some really good runs, when I felt fantastic and energized; I would like to believe that I can recapture that by following the same course.  And I miss my home, I miss the river.  It makes me sad to realize that the river I will swim in this coming summer is not the same river that I spent countless hours in as I was growing up.  It is a different place; it  cannot be the same when I step into it again.  This quote brings with it (at least for me) the weight of "you can never go home again."

But new waters are always flowing on to you.  Each time I step in the river, each time I step into my running shoes, each time I step out my door, it is a new experience, full of possibilities.  And there is something not only healthy but necessary about constant change.  It reminds us that we are always moving, whether we realize it or not.  So many of life's points of reference--those islands in the middle of the channel--seem to be the same day after day.  They give the illusion of stagnation, while in truth life is flowing along.  It is important that we notice and embrace that movement.


I want to say something profound here about change and flow and life, but there is no way to put it into words.  Which is okay, because I don't think that it needs words.  Instead, I will just leave you with a gentle reminder to not confuse life's points of reference--the little dots in the middle of the river or the middle of the run--with life itself.